Congratulations to the Boston University Terrier  hockey team that won the Beanpot last night beating Northeastern 5-2.  BU has now won 29 out of the 57 Beanpot championships played.  I thought it was a great game up until midway in the 3rd period with BU up by 1 goal and Northeastern on the power play.  BU responded with 2 short handed goals :30 apart to get a big lead.   While BU has consistently been a good team under Head Coach Jack Parker and under the direction of Strength and Conditioning Coach Mike Boyle, you have to give Northeastern 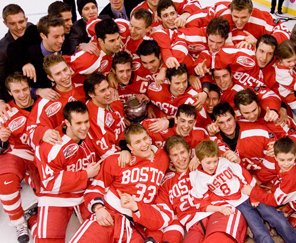 and their coaching staff credit.  They certainly looked like a team that his heading in the right direction under Head Coach Greg Cronin.  Maybe these 2 teams will meet up down the road sometime because BU is ranked #1 while Northeastern is #3.  You never know.