A discussion on the most recent episode of the StrengthCoachPodcast inspired me to write this post.  Anthony Renna and Mike Boyle were discussing goal setting and how important it is to write down your goals.  If people like Anthony and Mike are advocating goal setting, I think it is worth trying it out.  Goal setting is crucial for attaining success.

Writing your goals down has been promoted by several of the self-help gurus for years.  I have been personally writing down my goals now for 4-5 years and all I can say is that it works.  I really can’t imagine not having goals.

At the beginning of 2010, I had a list of goals that I wanted to accomplish.  Although I personally didn’t achieve all of them, I did get to achieve most of the goals that I set. I really believe that if I didn’t set these goals and develop a plan for achieving them, I wouldn’t have accomplished them. 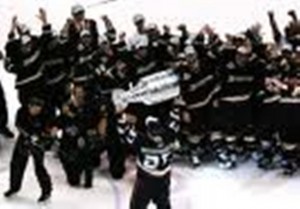 From a professional standpoint, the Stanley Cup is always the goal. 30 teams in the NHL begin each season with this goal in mind. Even though this is a big goal every year, it is probably the most difficult trophy to win in all professional team sports. I am realistic to know that there are so many factors that come into play for winning the cup. As a result, I don’t feel as unproductive if we don’t win it.  I also wish I could write down my goal of winning the Cup everyday and win it in June.

Some of my personal professional goals for 2011 include continuing to update this blog more frequently, developing an information product for hockey, speaking at more at seminars and conferences, writing more articles, and continuing to grow HockeySC.com.

Now that I have written my goals down, I will be writing all of them down on a daily basis and coming up with a plan to achieve all of them. I really have zero excuses.