I get into ruts sometimes about writing.  Often,  I can’t look at the screen and start to write when I have no clue of what I want to write about.  Here though, I am going to borrow from some (such as Eric and Charlie) who consistently  post their “Random Thoughts”:

–          I am enjoying my new opportunity in the Strength and Conditioning profession. The pre-season is imperative for the teams’ long term success.  The kids are buying in and they all have an unbelievable work ethic.

–          Since when (and this could be an article in itself) did Strength and Conditioning Coaches not be considered to be sport scientists? Aren’t we evaluating and monitoring our athletes on a daily basis?  I think that personal communication with athletes is huge.  Is there a disconnect between applying sports science and personal and effective communication with athletes?  I like testing and measuring my athletes and think it’s important to install change if necessary to individuals- but isn’t that coaching?

–          I remember at the end of my talk at the BSMPG conference back in 2012 when an attendee asked me “How do you measure fatigue?”  I don’t think that he (or probably lots of others in the audience) liked it when I told him that I communicate with and observe my athletes on a daily basis. I think that he was looking for what latest technological tool I was using.   I always ask how their days go, how things are going on at home, is there any changes that we think we should make to the program, etc.  However, I also see how technology and other methods can tighten things up and help us to do a better job.  I still think human interaction and coaching is key.  Would like to see those who blend sport science concepts and strength and conditioning concepts successfully in terms of wins and injury prevention because correct me if I’m wrong- There are lots of injuries still occurring and teams are still losing tons of games.

–          Years ago, I attempted to read the book Why Zebra’s Don’t Get Ulcers by Dr. Robert Sapolsky.  Honestly, I either didn’t get it or I thought it was boring- probably both.   I proceeded to put it away and not even think about it for several years.  When I heard other coaches or people who are smarter than me talk about stress and the Autonomic Nervous system, I had a deaf ear.  Maybe because I thought what I was doing was pretty good.   But I was intrigued on what was others were talking about.  I’ve now read the book and continue to read some of the chapters again and again.  I have changed my perspective on how I apply a training program/stress to my athletes. 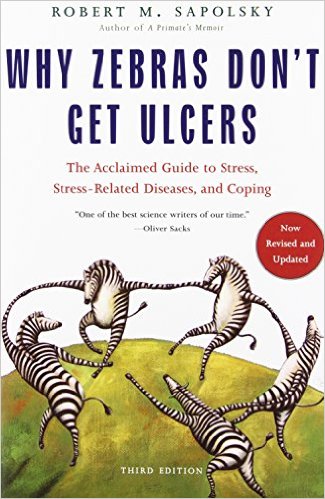 –          Is there a better method of applying stress to high level athletes than the High-Low method that was advocated by former Canadian Sprint Coach Charlie Francis?  To me, it makes too much sense.

–          When I think of the best athletes that I have been lucky to have worked with, their personalities were real laid back at all times other than when practice or games are going on.  Do they just have a better system of managing stress? I don’t know.  But again, reading the book and looking at things a little bit differently have made me ask some questions- which is a good thing.

–           A recent Vern Gambetta blog post was really good in regards to voting for Strength and Conditioning coach of the year.  He is bang on here and I agree with him.  Should an award as such be based on votes and popularity?  How can you actually determine who the best coach is?  When I see SOME of the stuff on YouTube whether it be athletes performing circus tricks or having absolutely awful form on lifts with the intention of making it look like their athletes are strong; I don’t think it is good for the profession.  Would like to see coaches who get more with less get more recognition.