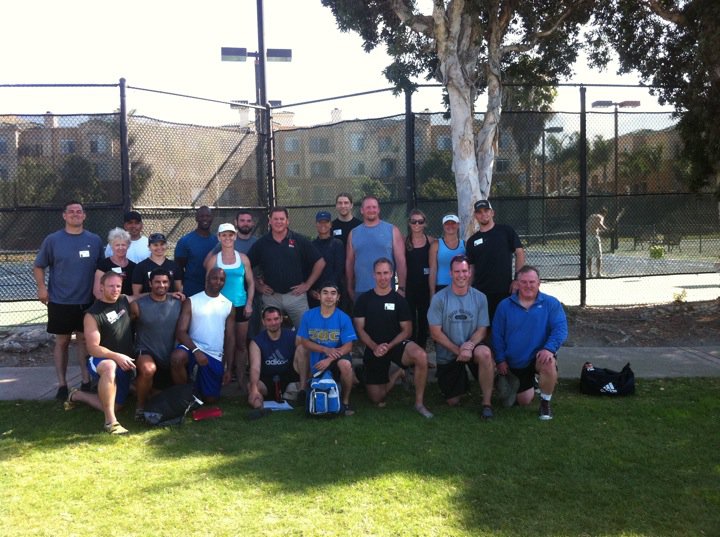 Part 1 of this was the why I did the RKC cert and what I did to prepare for it.  Now I want to cover the weekend.

I drove down to La Jolla on Thursday night so that I could check into the hotel and check in for the RKC.  I checked in, got my book, and then looked to see which team I would be on.  As I was registering, I bumped into Jim Hooper, RKC.  He is the owner of Balboa Fitness in Newport Beach.  Earlier on in the summer when I was first getting started in my training, I went to Jim’s facility and spent some time with him so I could work on my technique.   Jim really helped me establish a solid foundation so I could move forward with my training.  When I saw Jim on Thursday, he informed me that I was on team Dan John. This team was once mentioned on 7m and is a pretty popular team in the state. I can’t tell you how fired up I was to hear that.  I have been a follower of Dan for a few years now.  From his book Never Let Go, to all of his articles on the internet about strength and conditioning, I have pretty much read all of his material.  There is something about the way that he writes that really keeps me interested as the reader.  I have never met him in person, but I was definitely hoping to at least bump into him over the weekend.  Now, considering the fact that there is over 120 people registered for this certification and I believe 8 or so teams, I was lucky and very fortunate to land on Dan’s team.  Instead of just bumping into him, I was going to spend 3 full days with him getting coached by him.  To me, that is just awesome.

To be honest, and I think many of the attendees would agree, I thought we were going to do the Snatch test on Friday morning.  I think many of us really wanted to get it out of the way so that it isn’t hovering over us during the weekend.  I think we were all pretty surprised when we found out that we were going to do it on Sunday morning.  My first thought was how the heck was I going to be able to do the snatch test on the last day?  I could only imagine how sore I would be at that point.  Oh well, what are you going to do?

The first thing that we did on Friday was perform the chin up/pull up test.  I don’t know if it was the momentum and excitement around the group, but it really felt easy.  Then we were instructed to grab specific kettlebells and bring them to the field.  That’s when the process and outline of the weekend started to unfold.

I really liked how the certification was laid out.  What would happen is one person would speak to the whole entire group, and then we would go back to our individual teams and work with our team leader and assistants. I recall on Friday morning it was mostly Pavel.  Pavel first started to talk about the Swing.  As the weekend went on, you definitely know why the Swing is addressed first and foremost.  I was really impressed with Pavel.  He was very direct in his overall communication with us.  He also appears to have a very open mind.  Although he founded this organization, he is very open to new ideas.  What also really impressed me was that when
he was talking about people who couldn’t get their hips extended all the way through during the Swing, he has them do Glute Bridges or the “RKC Shoulder Bridge” in Pavel’s terms.  He also said words like “Glute Amnesia”.  This really impressed me because he is talking about some of the things that I want to always teach and correct with my athletes.  We do a lot of glute bridging.  Also, what does he prescribe for those who can’t extend their hips all the way up during the glute bridge?  Hip flexor stretching.  I just wanted to write that because to me Pavel is someone who I really admire and respect because he has been there and done that.  He has the beginners mind and he just wants to make sure his students and more importantly, their clients can do the lifts safely.  He doesn’t have a negative, grumpy attitude and disregard terms like “glute amnesia” like some others in this profession.

All throughout the weekend, Brett Jones was the guy who was the one who was directing the order and flow of the whole entire group.  Although he prescribed many swings to us for disciplinary reasons, Brett was really funny.  This guy knows his stuff as well.

The weekend went on as we were instructed by many team leaders on the lifts.  From what I recall, Brett Jones spoke about the Get-Up, Dan John spoke about the Goblet Squat, Clean and Front Squat, Franz Snideman spoke on the Press, and Dave Whitley spoke on the Snatch.  These were the lifts that we are expected to know how to teach and also be able to do properly on Sunday morning (in addition to the Snatch test).  I really liked this format because we got the person who was known for being good at teaching those exercises.  For example, Dan John is very passionate about Goblet Squats, Cleans and Front Squats.  He would be the guy that I would go to right away if I wanted to learn to do them properly.

All weekend long, the main instructor would teach the lift and then we would go back to our team and practice.  This is where I think being on Dan’s team was unbelievable.  Dan is a great coach.  He made things simple for us.  What I really liked about his coaching was that we got Dan John’s coaching methods, not necessarily the “RKC” way or the way Pavel would coach it.  Although the methods are most likely pretty similar, Dan’s personality and coaching methods may be a little different.  This is just another reason that I was impressed with Pavel.  He empowers his team leaders to do their job as effectively as possible.

Sunday morning came real fast.  I can remember my hamstrings just being sore since Saturday morning.  I would imagine that we had performed at least 1500 swings at this point.  Also, my triceps were sore from pressing and my “abs” were sore from planks.  I wouldn’t say I was fresh for my strength testing.

First up was the Get Up.  I used a 24k kettlebell and it went very well.  Then it was double 24 kettlebells for the rest of the lifts up until the Snatch test.  I did 5 Cleans, then 5 Front Squats, and then 5 Presses (all with about
5-10 minutes rest in between).  Then it was on to the Snatch test.  At that point, the thought of being sore was long gone.  In the back of my mind, I knew I could get 100 reps in less than 5 minutes.  I was kind of nervous because on the day before, my grip was slipping a little on the decent in the Snatch technique section with Dave Whitley.  Would it slip during testing causing me to drop it and not pass?  When it was my turn to go, I just visualized myself being in my back yard at home which is where I did my Wednesday Snatch workouts.  10 reps each side followed by putting the bell down x5 was the plan as it was always done this way in my backyard.  I wouldn’t say that the Snatch test was easy, but it wasn’t as hard as the last time I did this.  The bell was flying up there for me and my grip wasn’t even an issue.  The reason is that my Swing got much better throughout the weekend. The last number that I heard before I put the bell down was 4:30.  I passed the Snatch test.

What I think is even better about this certification is that you need to show that you can teach the lifts to people.  They actually get local volunteers to come in and be taught how to use kettlebells appropriately by us the students.  I and fellow team member Taylor Lewis had an interesting person.  Our main issue was trying to get her from a squat style Swing to a hip hinge  type.  She learned the movement and Taylor and I passed.

The last part of the weekend was the Grad Workout.  This consisted of us finishing off the weekend with a really hard workout.   With 2 kettlebells (a 24k and a 16k) we did 5 presses followed by 10 swings.  When we were done, we took 5 big steps and then put them down.  We went for the length of a football field (probably more actually).

After the grad workout, it was back to our teams where were given our certificates in a little graduation ceremony with the other team members.  This is when I realized that I accomplished my goal. 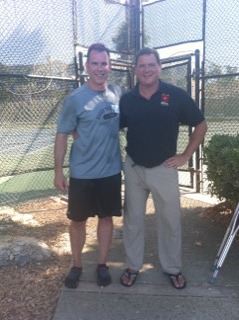 11 Responses to “My RKC Experience Part 2”